Happy new year! Wishing you, my lovely friends and interested readers, a successful and healthy 2017! Sorry my December update is much later than usual but it has just been Christmas. Here’s what’s been going down in my December!

I had my birthday at the beginning of this month and I brought breakfast bread into work. I went for three different types of loaves, some salami, Nutella, brie, cranberry jam, bog-standard cheddar-like cheese and those thin chocolate slices!

At the last minute I decided that I wanted to be home to be near my dearests for weekend and to squeeze in an traditional birthday curry from my favourite curry house The Great Kathmandu. I even got to have a dim sum lunch with my family! I’m so lucky that Manchester is only a short flight away and there are multiple cheap flights every day from Scandinavian Airlines (whose courteous air stewards offer all passengers a complimentary cup of tea or coffee) and Easyjet (whose sometimes rude ground staff/air stewards shepherd you into a glass pen at the far end of Copenhagen Airport to wait for the almost always late arrival of the plane).

So, one year older. Hoping that the next year continues to be full of pleasant surprises and amazing adventures! And lots more amazing food!

In an attempt to make more friends I had joined a Meetup book club group. We had chosen a mystery, The Casual Vacancy by J. K. Rowling on our first meet up. We agreed to read up to a third of the book and in December we met up in a local bar to talk about what we read so far. I’ve really enjoyed these meetings because it makes me read a book that I might not necessarily pick and it’s a common discussion point to begin with before we the conversation naturally moves onto other books that we’ve read and about each other. At the time of writing this, I’ve completed the book and SPOILER ALERT! — move on to next paragraph if you don’t want to know — It’s fecking miserable. It’s frighteningly real and current. The caricatures are despicable and only the teenagers have some redeeming qualities. A very very tragic story. — SPOILER ALERT END!

I also got invitations to two Christmas get togethers. (I only managed one.) These are very typical of Danish culture during the winter time because it’s so cold and expensive to socialise outside. For example, I went for some gløgg at the Christmas markets with friends from my Danish class, it was only about 8pm and the stalls were closing up and the market was dead! Turns out that most people were either on their work julefrokost (see below) or hosting/participating in hyggelige gatherings by the glow and warmth of candles! The one I managed to go to was really good, full of Christmas cheer and it gave me the opportunity to reinforce friendships and meet even more new people!

Just before I flew back to Manchester, I had my Danish level 1 test which corresponds to A1 level! The class had a party to celebrate afterwards and I managed to get video called-in while I was at Copenhagen airport! Really happy to be continuing class in 2017 with these lovely people.

Hyggelig Christmas get together at friends’ house 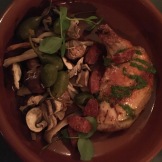 Other Danish Christmas traditions includes risalamande, a typical Danish Christmas dessert that’s a rice pudding containing almonds and cream, topped with cherry sauce. They had it at the work canteen. It was quite nice! I prefer it over Christmas pudding! At the canteen I also picked up a honningkage – a soft gingerbread cookie that’s quite similar to a German lebkuchen. It was in the shape of a pig!

The risalamande was also served at the work julefrokost – “Christmas lunch” but actually dinner in the evening. It is pretty infamous for office flings – seriously, google julefrokost and most of the links that come up talk about infidelity! A lovely old couple – who were dressed as Mr and Mrs Claus – I met on my way to my work’s julefrokost told me “Don’t be scared by them (my colleagues)!” – I was intrigued! But, what happens at the julefrokost, stays at the julefrokost so there’ll be no gossip from me!

What we did do was drink a lot of schnapps, have a competition and games that involved me wearing a Mr Bean mask, giving a speech that had to contain some certain Danish words and canvassing my colleagues to vote for me over Darth Vader to be president… It all made much more sense on the night! There was food from Meyers and the many bottles of wine from my boss’s own collection taken from his wine cellar! It was a good night but getting a flight early the next day for my birthday weekend getaway was not the smartest idea! 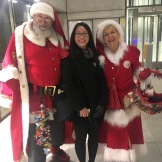 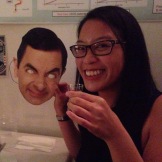 Me and Mr Bean drank schnapps

Christmas in the UK

The following week, I flew back to Manchester to have my 10th Christmas lunch at Artisan with my former lab! I couldn’t miss out! We had our ritual pre-lunch mulled wine at the famous Manchester Christmas Market in Albert Square. I got to meet the lab’s new postdocs and students, including a final year PhD student on the RUBICON exchange from South Africa. [We, at ISMC are also currently hosting a student of our own from the University of Cape Town’s Exercise Science and Sports Medicine division!] There was the western Christmas tradition of Secret Santa and more drinks after work with other alumni of my former lab! It definitely put me in the Christmas spirit for the rest of my holidays. 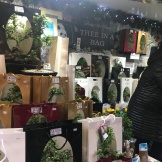 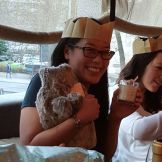 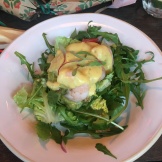 Prawns with avocado at Artisan 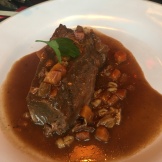 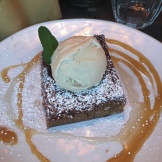 During my break in Manchester, I met up with friends and I ate out a few times, trying out the newer openings Shoryu Ramen and pop-up restaurant Stretford Ski Club, places I hadn’t tried properly, e.g. Yard and Coop and Byron Burger, and revisiting some favourites such as Pho. Mainly, I was glad to be having some cat cuddle time, chilling at home and condensing more of my belongings to transport back to Copenhagen.

Chinning with the cat 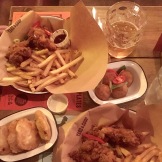 Too much carbs at Yard and Coop 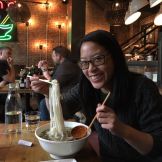 Me and pho from Pho

When I was home-home (in London) for Christmas, my friends made me a lovely lunch and dinner, I played Scrabble and I didn’t lose, my sister’s boyfriend cooked our family Christmas dinner and I was in charge of lunch on Boxing Day! It was really mild in the UK before Christmas and then it turned really foggy and frosty for our drive back up north (stuck in the motorway for 5 hours!!!). And just like that, Christmas was over! 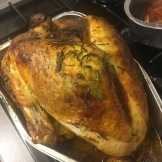 Mmm! Might not be the best pic but that turkey was sooooooo moist and delicious

I prepped this for Boxing Day

My dad made giant prawns in Cantonese sauce 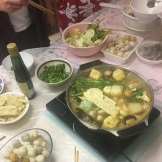 Frosty and foggy drive back up north

It was my turn at cake club. I made a gigantic cake and it was received well and there was enough for everyone! I didn’t bike to work that day and I was really really lucky to be offered a seat on the Metro that morning!

In December we had the annual Basic and Clinical Research in Musculoskeletal and Oral Sciences PhD Student Symposium which was held at Cromwell Borupgaard Spa Hotel and Conference Centre at Snekkersten, 40 minutes train ride north of Copenhagen. The meeting was a great window into the work done by our department and other labs that are part of the graduate program. All PhD students had to present and all received thorough formal feedback on their presentations, which I thought was a brilliant idea. In addition to great science by my colleagues the hotel served up amazing food at breakfast, coffee breaks, lunch and a delicious and impressive 5-course dinner with wine pairing! I didn’t know it was a spa hotel but next year, I’m going to make the most of it!

Three times as much mixture for cake club 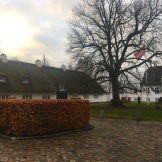 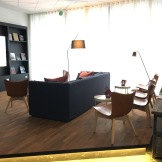 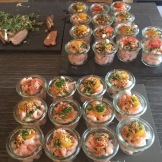 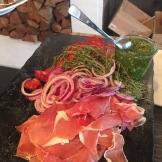 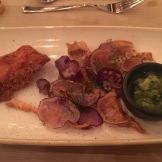 Also in this month the paper from a collaboration with industry and my former lab got submitted! Fingers crossed. I also had time to pop back into the old lab to discuss our manuscript-in-progress and to meet with a new collaborator who is an expert in CRISPR/Cas9-mediated genome editing! [Listen to this great RadioLab podcast episode to find out what CRISPR/Cas9 is!]

And some really good news! I was awarded the Region Hovedstaden Postdoc Research Award, a 50% salary award for the next two years! Whoohoo!

Cycling got tough! It was dark and windy, sometimes icy cold rain, and I kept having bike light casualties! (At least I didn’t get another puncture!) I had been a happy owner of value for money Cateye HL130/TL130 LED lights – they’re bright, the AAA batteries that it takes are easy to change and they last a while, however their slide-in clip attachments, although great for putting the lights on and taking them off the bike, are not secure enough for going over bumps – they kept popping out and falling apart! And it was sometimes risky to stop and collect the pieces. The last time this happened to the tail light I didn’t hear it so I had lost it completely. I didn’t notice until I got to work and I was gutted because I had just replaced the batteries inside (cost me 30 DKK for the 2 AAA batteries from the expensive supermarket Irma )! Sigh. Thankfully, I work near a dollar store and was able to pick up a cheap clip-on for only 15 DKK including batteries! Winner. Still, it wasn’t a suitable long term solution as I can’t really clip it on my basket that I pimped my bike with in July. Luckily in one of the many Flying Tiger shops in Copenhagen one can pick up some cheap and cheerful silicone wrap around LED lights (much like these) which was good for emergency replacement but not long term because their batteries can’t be changed! They did the job until I got new lights from good ol’ Decathlon for my Christmas present! I chose some B’TWIN VIOO 300 lights with USB charging cables (no more expensive batteries required!) and similar silicone wrap around attachments but with much brighter light beams! I’m real chuffed with them!

Emergency lights for 15 DKK at the dollar store

New lights from Decathlon and temp replacement ones from Tiger 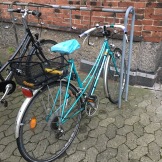 A lady said “Det er en flot cykel!” and I was really proud because I knew what she was saying and because she said my bike is beautiful!

Spoiler alert for the January update: I initially felt quite sad about returning to Copenhagen but was immediately excited about seeing the good people whom I’ve made friends with in Copenhagen! I had no expectations on what I was going to feel coming back to work but it was the most hyggelige welcome I could ever have imagined. It was genuinely really nice to see and catch up with all my colleagues and my work BFF again!

One thought on “Glædelig jul i Storbritannien”